Kevgir has designed by canyoupwnme team for training, hacking practices and exploiting. Kevgir has lots of vulnerable services and web applications for testing. We are happy to announced that.

1) Run the OVA in a VM and connect to the webserver 2) Have Fun!

I would probably have never finished', this project without you guys ;)',

A friend wanted to get into some simple exploits. I suggested starting out with web security, she was all for it. But when I started browsing vulnhub and the likes I couldn't find anything like I had in mind. So I wrote my own.

This is a story based challenge written in a style heavily inspired by Neil Stephensons Snow Crash and William Gibsons Sprawl Trilogy. Each chapter is unlocked by solving the puzzle. From hardcoded clear text javascript password checks, SQL-injections and cracking hashes to a simulated terminal. You only need to start the VM, a webserver will come up and you can connect with your browser. In fact you never have to leave the browser.

Teach some basic well known techniques and attacks. Spark some curiosity, make the user look at the source code and try to figure out what's going on behind the scenes. The main goal is to give a nice welcoming intro to the scene and hopefully also teach something about ethics and responsibility.

The CsharpVulnSoap virtual appliance is a purposefully vulnerable SOAP service, focusing on using XML, which is a core feature of APIs implemented using SOAP. The web application, listening on port 80, allows you to list, create, and delete users in the PostgreSQL database. The web application is written in the C# programming language and uses apache+mod_mono to run. The main focus of intentional vulnerabilities was SQL injections.

The vulnerable SOAP service is available on http://<ip>/Vulnerable.asmx, and by appending ?WSDL to the URL, you can get an XML document detailing the functions exposed by the service. Using this document, you can automatically fuzz the endpoint for any vulnerabilities by parsing the document and creating the HTTP requests expected programmatically.

The SQL injections yield a variety of potential exploit techniques since different SQL verbs are used to perform actions against the server. For instance, a SQL injection in an INSERT statement may not be exploitable in the same ways the DELETE or SELECT statements will be. Using a tool like sqlmap will help you learn how to exploit each SQL injection vulnerability using a variety of techniques.

If you are curious how sqlmap is performing the checks for, and ultimately exploiting, the vulnerabilities in the web application, you can use the --proxy option for sqlmap and pass the HTTP requests through Burpsuite. You can then see in the HTTP history tab the raw HTTP requests made by sqlmap.

The CsharpVulnJson virtual appliance is a purposefully vulnerable web application, focusing on HTTP requests using JSON to receive and transmit data between the client and the server. The web application, listening on port 80, allows you to create, find, and delete users in the PostgreSQL database. The web application is written in the C# programming language, uses apache+mod_mono to run, and is, at the very least, exploitable by XSS and SQL injections.

The SQL injections yield a variety of potential exploit techniques since different SQL verbs are used to perform actions against the server. For instance, a SQL injection in an INSERT statement may not be exploitable in the same ways the DELETE or SELECT statements will be. Using a tool like sqlmap will help you learn how to exploit each SQL injection vulnerability using a variety of techniques.

If you are curious how sqlmap is performing the checks for, and ultimately exploiting, the vulnerabilities in the web application, you can use the --proxy option for sqlmap and pass the HTTP requests through Burpsuite. You can then see in the HTTP history tab the raw HTTP requests made by sqlmap.

A tool for teaching and learning about systems, networks and security

NETinVM is a VMware virtual machine image that provides the user with a complete computer network. For this reason, NETinVM can be used for learning about operating systems, computer networks and system and network security.

In addition, since NETinVM is a VMware image, it can be used for demonstrations (i.e. in classrooms) that can be reproduced by students either in a laboratory or on their own laptop and thus, at home, at the library... For these reasons we present NETinVM as an educational tool.

NETinVM is a VMware virtual machine image that contains, ready to run, a series of User-mode Linux (UML) virtual machines. When started, the UML virtual machines create a whole computer network; hence the name NETinVM, an acronym for NETwork in Virtual Machine. This virtual network has been called 'example.net' and has fully qualified domain names defined for the systems: 'base.example.net', 'fw.example.net', etc.

All of the virtual machines use the Linux operating system. The VMware virtual machine is called 'base' and it runs openSUSE 13.2. User-mode Linux machines use Debian 6.0 and they have different names depending on their network location, because they are grouped into three different subnets: corporate, perimeter and external. The subnetworks are named 'int' (for internal network), 'dmz' (for DMZ or demilitarized zone, usually used as a synonym for perimeter network) and 'ext' (for external network).

ext<X> + UMLs connected to the external network (ie: Internet). Because a picture paints a thousand words, or so they say, the following figure shows NETinVM with all of the virtual machines running inside. 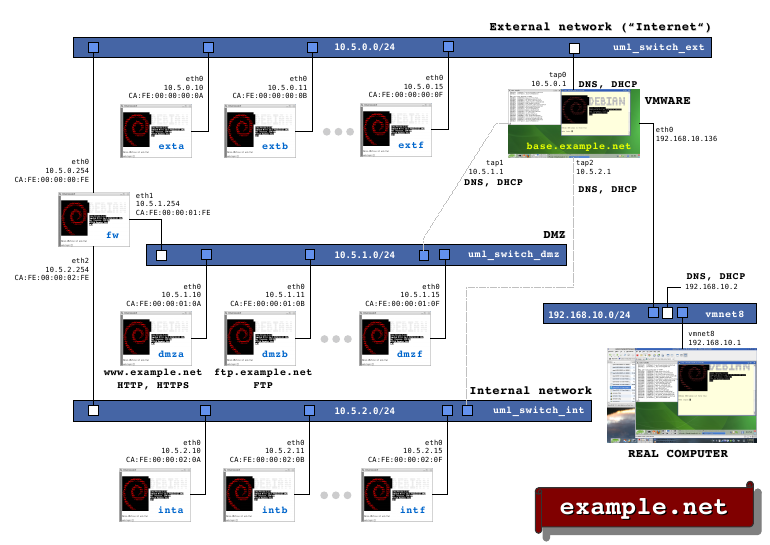 General view of NETinVM in VMware. The document example-net.pdf offers a detailed view.

All of the elements referenced before are shown in the image with their IP and ethernet addresses. The following rules have been used for assigning addresses:

When they boot, all UML virtual machines get their network configuration from 'base', which provides DHCP and DNS services to the three NETinVM networks through its interfaces 'tap0', 'tap1' and 'tap2'.

Communication between 'base' and any UML machine, in both directions, is direct, without going through 'fw'. (When the communication is started from a UML machine, the IP address of the interface of 'base' in the corresponding network must be used.) This configuration permits access from 'base' to all UML machines using SSH independently of the packet filtering configuration at 'fw'.

As an additional consideration, please note that the SNAT configuration in 'fw' described above is necessary for responses to outgoing connections to the Internet originating from the internal or perimeter networks to come back through 'fw'. Otherwise they would be routed directly from 'base' to the UML machine through 'tap1' or 'tap2' without traversing 'fw'.

This boot2root box is exclusive to VulnHub. If you have a crack at the challenge, please consider supporting VulnHub for the great work they do for our offsec community.

In 1965, one of the most influential bands of our times was formed.. Pink Floyd. This boot2root box has been created to celebrate 50 years of Pink Floyd's contribution to the music industry, with each challenge giving the attacker an introduction to each member of the Floyd.

You challenge is simple... set your controls for the heart of the sun, get root, and grab the flag! Rock on!

This is a boot-to-root machine will not require any guest interaction.

There are two designed methods for privilege escalation.

If you are having issues with VirtualBox, try the following:

You are looking for two flags. Using discovered pointers in various elements of the running web application you can deduce the first flag (a downloadable file) which is required to find the second flag (a text file). Look, read and maybe even listen. You will need to use basic web application recon skills as well as some forensics to find both flags.

The virtual machine comes in an OVA format, and is a generic 32 bit CentOS Linux build with a single available service (HTTP) where the challenge resides. Feel free to enable bridged networking to have the VM automatically be assigned a DHCP address. This VM has been tested in VMware Workstation 12 Player (choose "Retry" if needed), and VirtualBox 4.3.

The named of the Virtual machine is "Acid-Reloaded". This Virtual Machine contains both network logics and web logics. I have added new concept here and let's see how many of you think more logically. :-)

You need to extract the rar and run the vmx using VMplayer . The machine has DHCP active list so once automatically assign an IP network, the next step will be to identify the target and discover the / the service / s to start the game.

Escalate the privileges to root user and capture the flag. Once any one able to beat the box then shoot me a mail

Description: Boot2root, box will get IP from dhcp, works fine with virtualbox&vmware.

Hints: Use your lateral thinking skills, maybe you’ll need to write some code.